At the suggestion of my son Alexander, the two of us recently took a trip back to where I first did fieldwork for the Geological Survey of Botswana, starting in 1970 - the Okavango Delta in the NW corner of the country. We flew directly to Maun from Johannesburg and, after an initial overnight camping trip by motorboat and makoro, picked up a rented 4x4. We set off NE towards Shorobe with a plan to drive all around the Okavango Delta, taking advantage of the 400 km Four Rivers Highway along the length of the Caprivi Strip (Namibia) and the tar road from the Mohembo border crossing back to Maun via Lake Ngami. Despite a number of typical bush-driving setbacks, we completed the 1433 km camping trip in seven days, about one-third of it on dirt roads.

A selection of pictures from our journey may be found here. [The original photos have been recovered but the order is no longer entirely correct. Thank you, Google.]

As well as the advent of tar roads, many other things have changed in 40+ years - but mostly for the better.  One of the greatest challenges in 1970 was finding accurate locations for more than 1500 gravity observation points in and around the Delta. Nowadays this is easily achieveable using the GPS on the i-Phone I use every day, as well as on my camera. Maun was virtually unrecognisable with new supermarkets, schools and hospitals, as well as a good road network. The old terminal building at the airport still stands, dwarfed by more modern structures. And the old general store at Sehitwa - a distinctive corrugated iron building - can still be found, hidden behind a more modern facade. The water level in Lake Ngami was very close to Sehitwa and the Kunyere River was flowing fast at Toteng and teeming with fish.  Similarly, the Savuti Channel at the north end of the Mababe Depresion was full of water.

Food for thought in trying to understand the hydrology, geomorphology - and seismicity! - of this fascinating corner of the world. The shear size of everything is exhilirating to those of us more used to European dimensions. Earlier this year the Okavango Delta was declared the 1000th World Heritage Site. 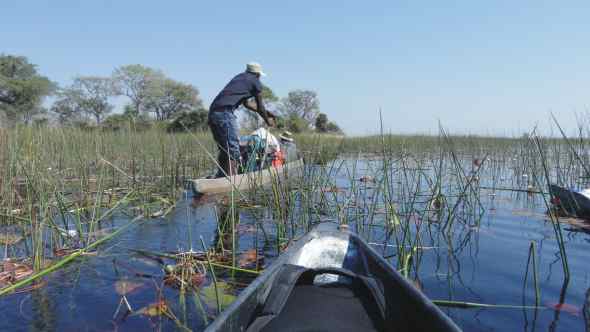