On Saturday January 16 Geosoft celebrated its 30th anniversary with a Gala Evening at the Royal Conservatory in Toronto. Colin Reeves was invited to take part as one of the founders of the company. About 150 employees and spouses attended the evening with many receiving awards for long service to the company.

The idea started in 1981 when both Ian MacLeod (now Chief Technologist at Geosoft) and Colin became aware that small, so-called 'micro-computers', were becoming available with graphic capabilities that could accelerate the process of geophysical interpretation.  For example, calculated anomalies for a hypothetical body could be compared with observed anomalies directly on the screen, by-passing a visit to a remote data centre with a deck of punch-cards and the subsequent need to plot the results by hand - a turn-round time of at least 24 hours. Colin and Ian eventually pruchased their own IBM-PC within six months of its first appearance as this appeared to be a system that would likely break into the mass market. Geophysical software to capitalise on this was written in 1982 as the pair gained familiarity with the system's capabilities. An old monochrome TV served as the first monitor. Colour came later!

Colin bade a fond farewell to Toronto in the summer of 1983 to take up his new post as geophysics professor at ITC in Delft. Ian persevered with the Geosoft concept and eventually decided on an independent existence for the company, outside of the geophysical consulting environment. Geosoft was founded as an entity in 1986 and has grown steadily from its small beginnings to give employment to way over 100 employees with regional offices in Europe, South America, Africa and Australia in addition to the head office on the Toronto waterfront. 'Microcomputers' have become more numerous than motor cars across the whole world and Geosoft has become a by-word for geophysical software wherever geophysical mapping is carried out.

Ian and Colin at the Gala appear in the picture (courtesy of Geosoft)  below. 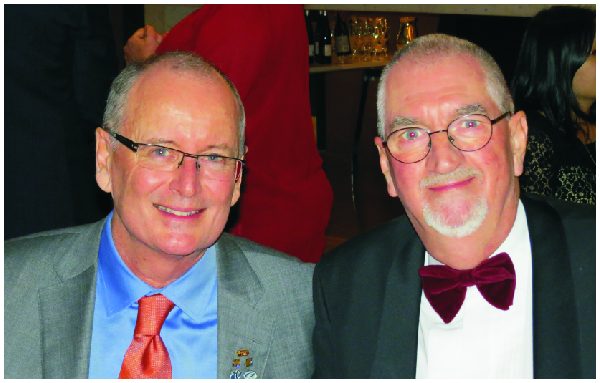