The Petroleum Exploration Society of Great Britain held its 16th annual 'Africa' conference in London from August 28 to September 1, as usual in collaboration with the Geological Society of Houston.  The event kicked off with an evening lecture at the Geological Society at Burlngton House when Colin Reeves spoke on 'Gondwana re-assembled: challenges for making the new map and insights for exploration'. In it he reported on progress with the new geological map of Gondwana and the most recent deveopments in trying to understand the precise geometry of re-assembled Gondwana and its dispersal, starting in the Jurassic. The latest animations were also available to delegates on the conference CD.

As usual, the main body of the conference provided a variety of excellent papers on current hydrocarbon exploration in Africa.  There was also an extensive exhibition of booths from the industry and its scientific support organisations and an array of posters outlining current geoscience research in Africa.  Thanks to support from Renata Schmitt and the IGCP-628 team at the Federal University in Rio de Janiero (UFRJ), Colin was able to show the draft version of the new Gondwana geological map that was first shown at the IGC in Cape Town a year ago [picture below] among the posters. This raised a good deal of attention and the expectation of a valuable new resource of fundmental geo-data once publication is achieved next year.  The conference attracted more than 400 participants, despite events in Houston that kept many particpants from the New World at home. 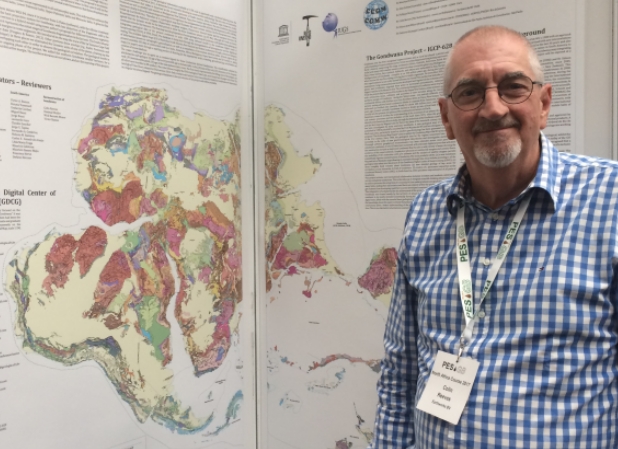