The 18th in a series of annual conferences on the petroleum geology of Africa was held at the London Olympia, October 1-2.  The series, organised by the Petroleum Exploration Society of Great Britain (PESGB) and the Geological Society of Houston, alternates between these two cities. The Olympia meeting was attended by over 500 delegates who followed two days of presentations, posters and an industry exhibition.  Colin Reeves presented his most recent work on a plate-tectonic model for the dispersion of the other Gondwana continents from around Africa. A new discovery is the plate-tectonic role of a coast-to-coast Mwembishi shear zone stretching 3200 km from Namibia to Tanzania, passing through parts of seven African countries.  It was active as a dextral strike-slip feature in Early Cretaceous time (135-129 Ma).

The focus of the presentation is the concentration of a number of plate-tectonic events around southern Africa into this short time interval (Hauterivian) which Colin calls the 'Second Gondwana disruption event', following the first event with the outbreak of extensive volcanism at around 183 Ma (Pliensbachian).

Recently-published marine magnetic anomaly data off Mozambique and its conjugate margin of Antarctica (Mueller & Jokat, 2019) show that a distinct 'sidestep' in the southward progress of Antarctica against Africa occurred from 135 to 129 Ma.  At the start of this interval was a mid-ocean ridge reorganisation off the SE corner of Africa and the outbreak of the Tristan plume in the central South Atlantic Ocean.  While the opening of the southernmost South Atlantic had already been underway for about 10 myr at the time, post-135 Ma dextral movement on the Mwembishi shear zone could delay opening of the South Atlantic south of Walvis Bay by several million years, making a 1000 km stretch of margin north of the Orange River mouth the last part of the South Atlantic to open.  By 129 Ma, however, incipient ocean was continuous all the way from Nigeria to Western Australia.

Copies of the Powerpoint from Colin's presentation are available on request from the author  at reeves.earth@planet.nl.  The full four-page abstract of the presentation (with figures) may be downloaded here. 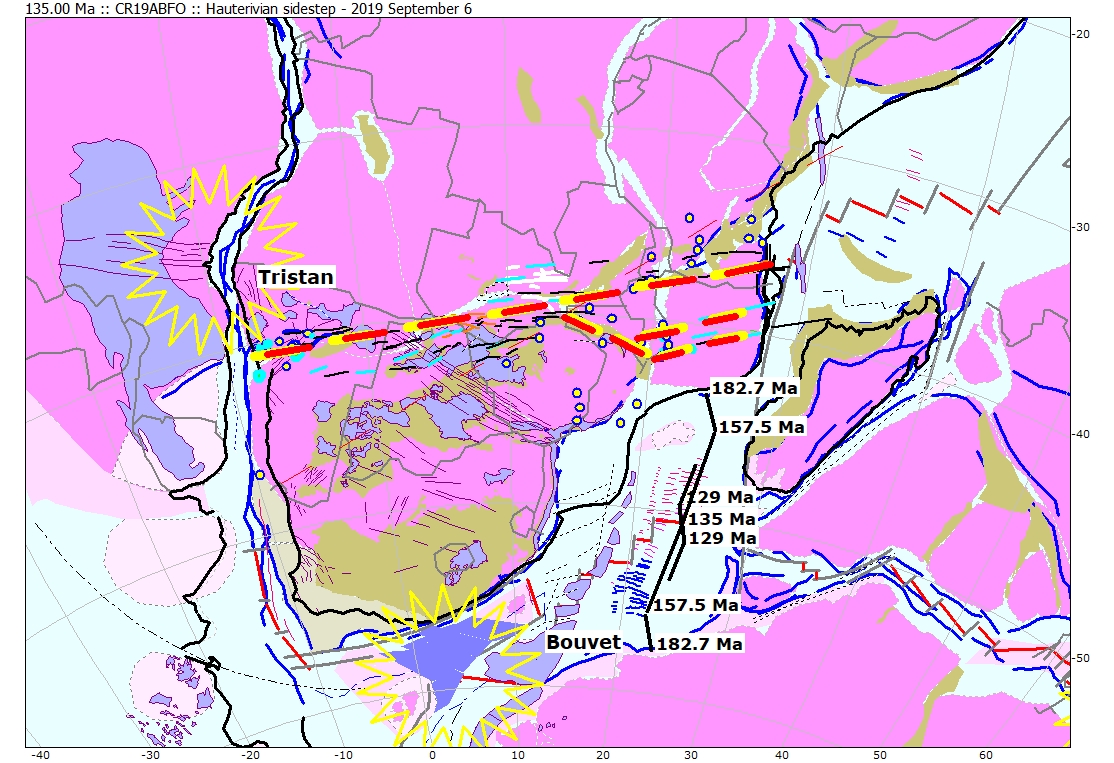